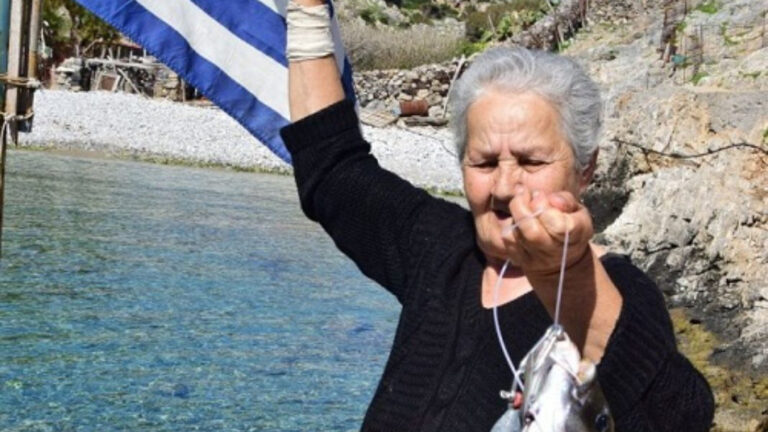 Isolation is a common word in these times of pandemics and containment measures linked to the spread of covid-19. In the case of a quarantine one speaks of isolation as a suffered condition, often an antechamber of loneliness, but there is also another isolation that has little to do with loneliness, as a desired condition. Not necessarily as a spiritual dimension of hermits, monks, or stylites, but sometimes for the simple love of a place, rootedness and as a form of resistance.
This is the case of Irini Kotsatourchi, the only and lone inhabitant of Kinaros, a small paradise of 4.5 square kilometers officially belonging to the Dodecanese region, located halfway between Kalymnos and Amorgos, and together with Astypalea the westernmost point of the Dodecanese.

A remote and lonely place like few in the Aegean, not reachable by mass tourism, and this time not even by niche tourism. It is not possible to stay in Kinaros, the island does not have a hotel, nor a tavern where you can eat, and no ferry reaches it.
Irini, also known as Kyra Rinio, or “Mrs. Rinio” is the only inhabitant of this remote and solitary part of the Aegean. After the loss of her husband in 2013 she decided to stay on the island and thus become the only, and probably the last, inhabitant of Kinaros. The only contact Irini has with the outside world is the subsidized boat that reaches the island from Amorgos once a week to bring her the goods necessary for her survival, and if the sea does not allow it, it can take up to 20 days before being able to reach the island.
His only way of communicating with the rest of the world is through his satellite phone, and his only source of information is television.

“I’m not afraid” she told the interviewers, even when she was considered missing after a blackout lasting more than a week due to a violent storm that hit the island, leaving it without telephone and communication channels for a long time, and suspended the entire nation that followed the story from national news. She refused helicopter rescue and demanded to be left on the island.
Speaking to the Greek daily Dimokratia, Irene revealed her fears which instead exclusively concern Turkey’s conquest of the islet. “I’m afraid that when I close my eyes the island will be taken by the Turks. Erdogan has already stated that Kinaros is a place of worship “.
Despite this, she stressed, “I never felt threatened despite living in a place where Turkish fighter planes often fly. I’m not afraid.”
As of 2018, the Greek government has included Kinaros on a list of islands subject to a special VAT increase to 24% as an exceptional measure to fill the government’s serious budget gaps. Austerity would therefore also have reached Kinaros, imposing itself with its regime of cuts in public spending and limiting private consumption, were it not for the fact that there are no services on the island, not even electricity, and there are no transactions. Austerity is a word hard to understand to our geography of the margins, and to that lone inhabitant of this remote strip of land in the Aegean sea.