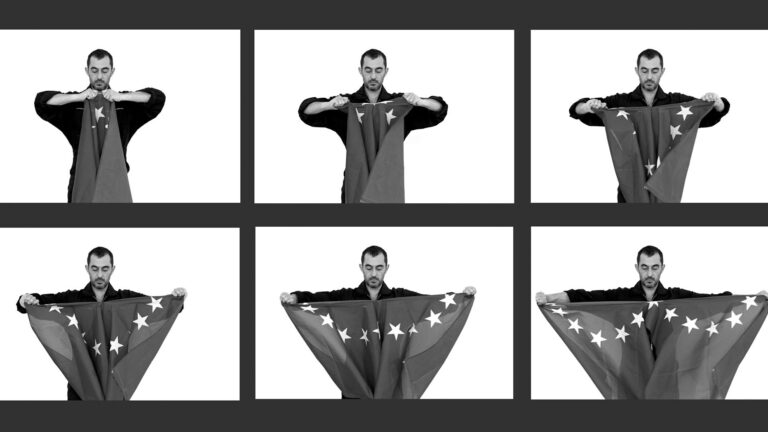 “Anyone publicly and intentionally destroys, disperses, deteriorates, makes the national flag or another state emblem is punished with imprisonment up to two years”

Tearing a flag is a powerful, insurrectional gesture, a destructive act. But can the desecration of a flag turns into a constructive act? The answer comes by Yiannis Pappas, a Berlin based artist, but with greek origines, from Patmos, the island of the St. John’s Apocalypse, a few tens of nautical miles from the European border with Turkey. Lands, or to better say, seas, well known to the chronicle of recent years.
80 flags, and 80 therefore we assume are the courts in which the artist is potentially at risk of a process.
Flags torn and made to publicly pieces, and then sewing piece by piece in a patchwork of stars, strips, symbols, and colors, and recomposed in a new flag of non-existent, utopian nation, flags of a new world of which we urgently need, out from any imaginable idea of borders. It is the utopia, or the value that contemporary man today gives to utopia, the true and wonderful protagonist of Half Staff. A criticism of this excess of realism that as a meat grinder follows our world and our perspectives.

A powerful symbolism, son of these last decades of growth of nationalisms, and which also reflects a strong sensitivity of Yannis Pappas on the issue of the Mediterranean sea, of refugees, tragedies of the sea, and still tensions in that land between Asia and Europe. All themes particularly felt in that strip of Aegean, and for those who live, or know the border lands well.
A reflection, recently recontextualized in an interesting exhibition organized by Diskurs in Berlin about the relation between Covid and borders.

“Covid-19 doesn’t ‘think’ in terms of countries, it largely ignores man-made borders, and exposes a need of globally synchronizing in the battle against the virus.” – Herbert Ploegman

Half Staff reflects these years with intensity, an artwork of which we need now.
And it must not be surprised that Marina Abramovic has been personally interested in the work of Yannis Pappas by selecting and introducing him recently among the 5 performance artists on the WePresent platform.